﻿This was originally posted on February 5th 2018.

Since Daisy, I promised myself that I would get a dog that is friendly with other dogs, is not scared of things and takes the world by storm. Daisy was none of those, although to give her some credit she didn't seem scared of anything as she tried to attack dogs ten times her size, and growl at gang members walking past. Unfortunately, when a living being is in the mix, you can't really decide what you are going to get. You can lead them where you want, but in the end, you cannot tell them how to behave. 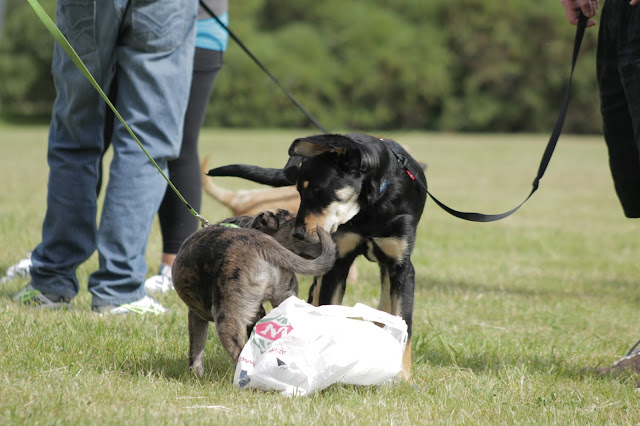 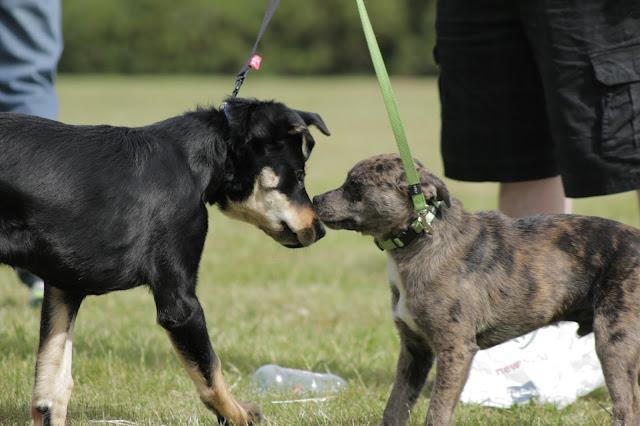 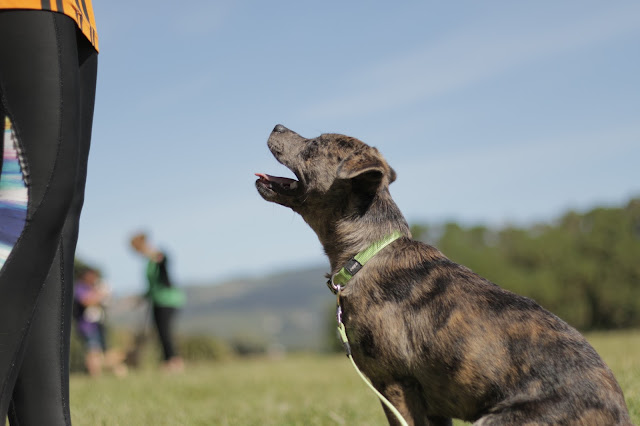 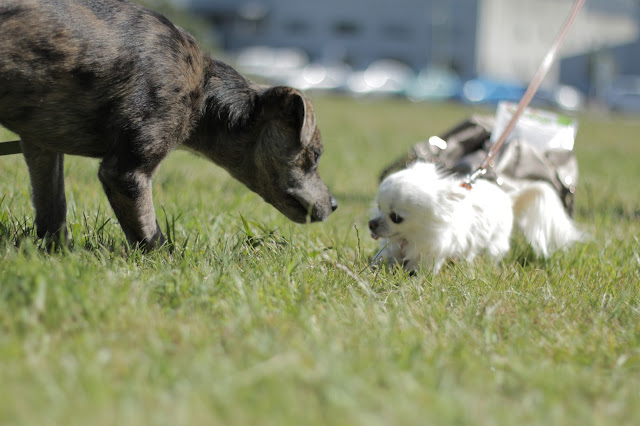 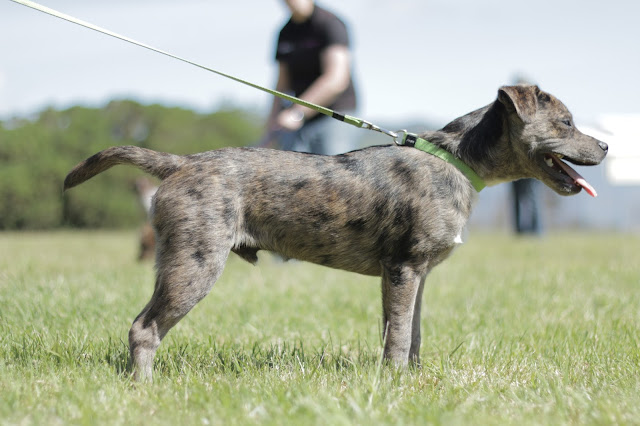 Diego as a puppy was inquisitive, but nervous. He would get his haunches up and not go near everyday things like a wheel barrow, a random tree stump and even flowers. As a puppy I spent ages taking him to all these new locations and places to try and encourage him to realise the world isn't scary. I made sure random people and children pet him on the streets. I took him to the beach where there was tonnes of dogs, and lots of noises and smells. He slowly grew out of his nervousness and it happened less and less. My aunty owns Diego's brother, Jagger and he has the same nervous tendencies. He doesn't like new things, sounds or people, and he will not allow you close enough to pet if you are unfamiliar. I think this shows that in those early weeks of their development something went seriously wrong. Remember they were from one of New Zealand's only puppy mills.

Diego grew confident but was often bowled over at the beach by over exuberant labradors who would run full speed at him and accidentally knock him over. This didn't effect him then, but I can really see this coming out now that he is older. He went to group walks, was involved in puppy school and was often found playing with other dogs at the local parks. He did live with another dog in those early years, but they didn't play or get on as well as Diego and Chico or Ollie. 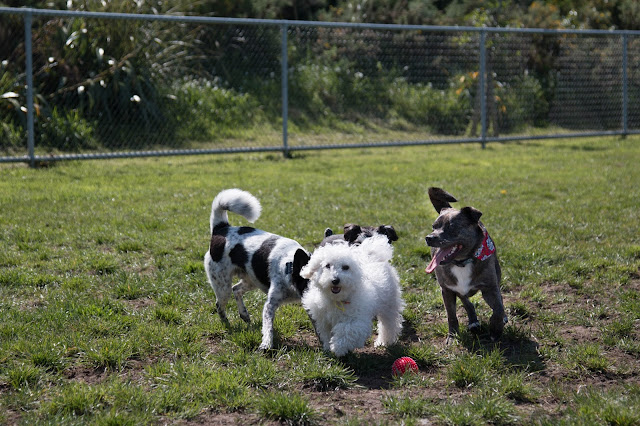 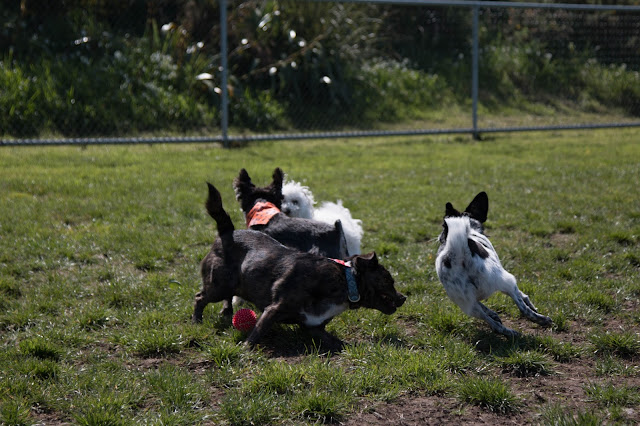 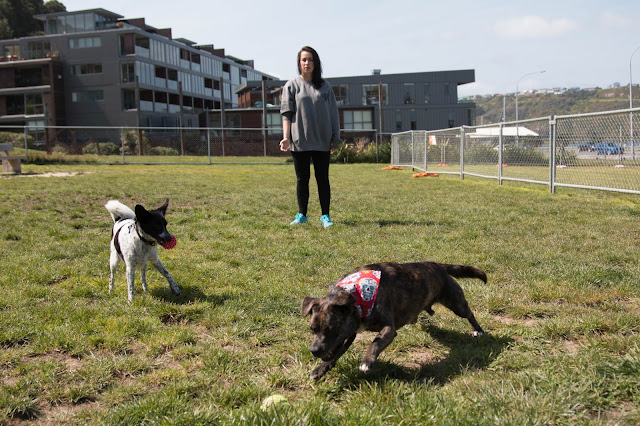 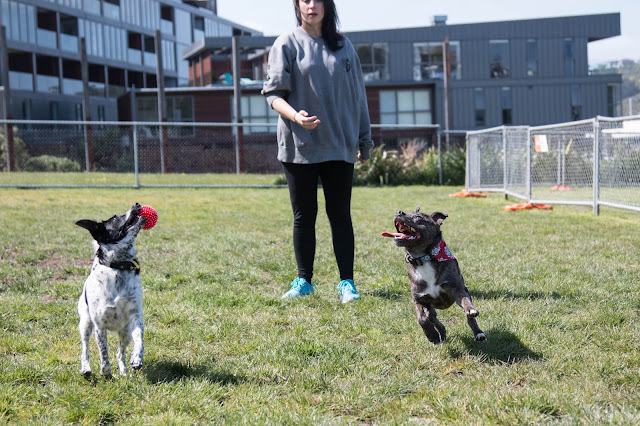 When Diego was one and a half I broke up with my long term boyfriend. This was not the best break up, and meant I left him, the house and the dog we lived with all in one day. Not only that, my mother moved from Upper Hutt where we lived to Whanganui two days later. So not only had we lost our new family, we were essentially homeless. Luckily my older sister and brother were here for the Summer and we spent the whole of January travelling between Whanganui to see my mother and Rotorua to hang out with my dad. Looking back I am grateful for that time spent with them, and the many hours of car trips we had. 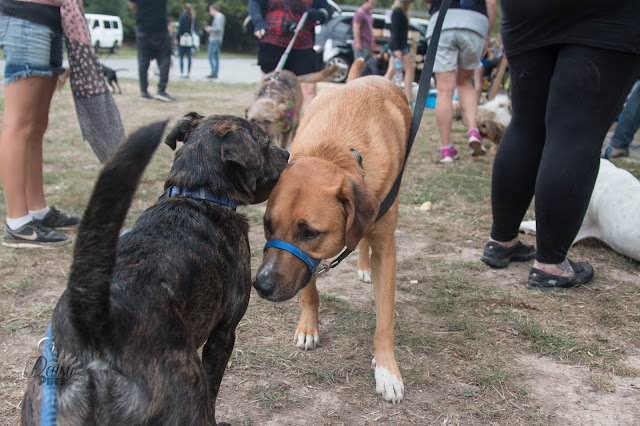 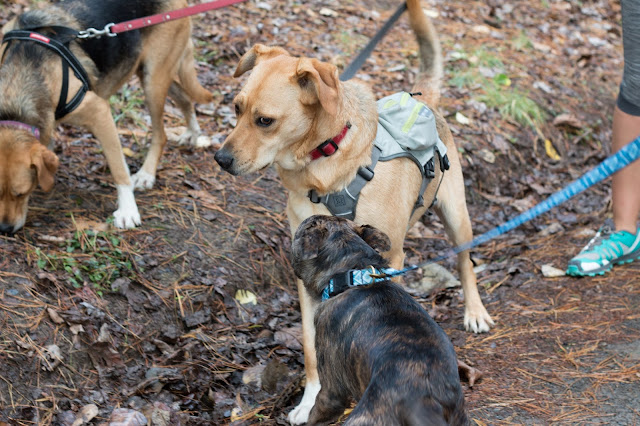 In February, I found a place in Wellington to live that also had a large black Labrador cross living there. Diego wasn't immediate friends with this dog, and only just tolerated him within the small confines of our flat. During this time I found work, but had to do ten hour days plus an hour and a half travel each day to afford living where we did. Diego did not cope well with this transition from being at home with another dog companion, to travelling with me 100% of the time, to staying at home all day with a dog he couldn't stand. In the end, we had the ranger come over and tell me that Diego was spending all day crying and the neighbours had complained about the noise. One night I was walking Diego and we stumbled into a Greyhound. Diego was overjoyed, and was licking her face and was super excited to see a Greyhound again after missing Chico. That decided my move to Whanganui. That weekend I dropped Diego off at my mothers to live, while I finished my last two weeks at this other job. 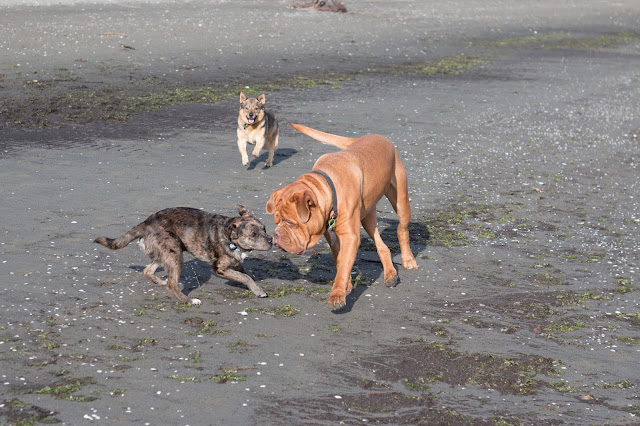 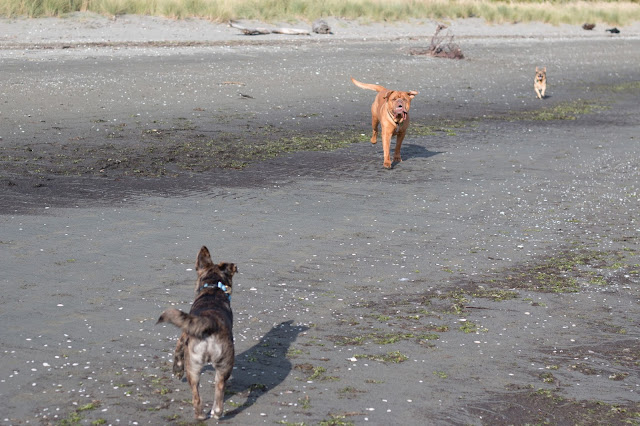 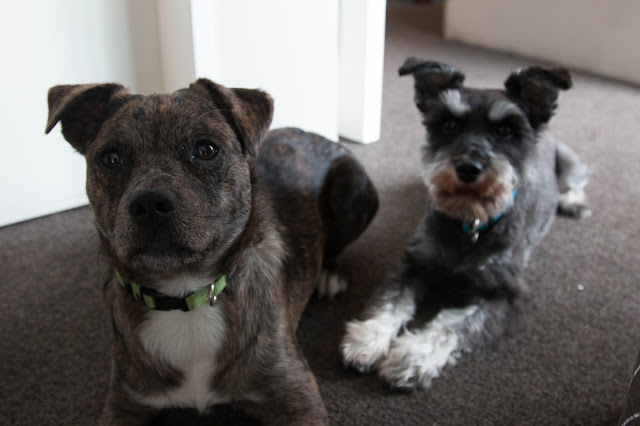 In Whanganui, Diego was so much more settled. He hung out with Chico all day, and because I was yet to find a job, he had me at home a lot of the time. It was a good few months and Diego stopped barking or trying to escape when we went out. Unfortunately, I couldn't find work in Whanganui. Whanganui's job market is insane, with hundreds of people applying for one job position. There also isn't a bunch of offices in Whanganui which is what a lot of my previous work had been. Due to this, I couldn't stay. I managed to score my old job back in Upper Hutt, and they wanted me to start that Monday. I called up my aunty who lives in Upper Hutt and asked if she minded me staying for a week while I sorted accommodation for Diego and I. 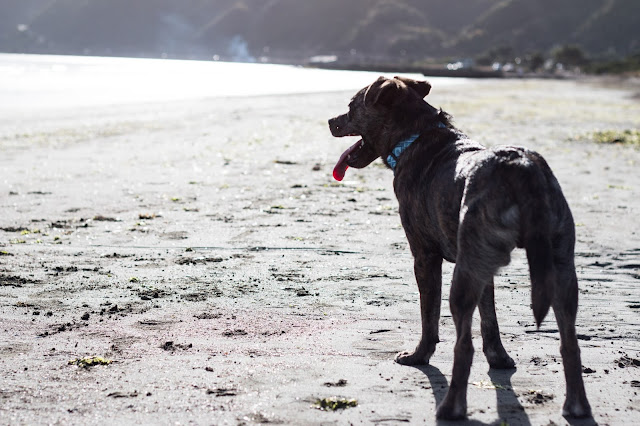 During this time of looking for a house, which took five months instead of a week, I would work all week in Upper Hutt and then drive home in the weekends to visit my family and Diego. I couldn't have Diego in Upper Hutt with my aunty and I as she owns another dog which is dog aggressive and couldn't be trusted with Diego. This was a long time, and quite difficult for both Diego and I. Mum done such an amazing job of looking after Diego, she treated him like the prince he is, and would call him her grandson. I am forever grateful for my mother and that is just one of the plenty of times she has shown how much she loves and cares about me. 2016 was a hard year for me and I really don't know how I would have got through it without her support and guidance. 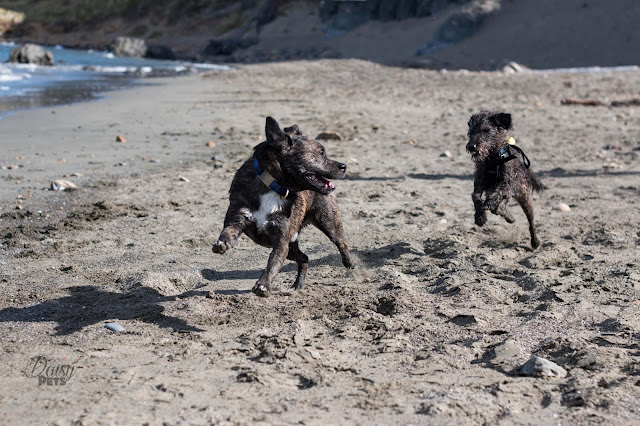 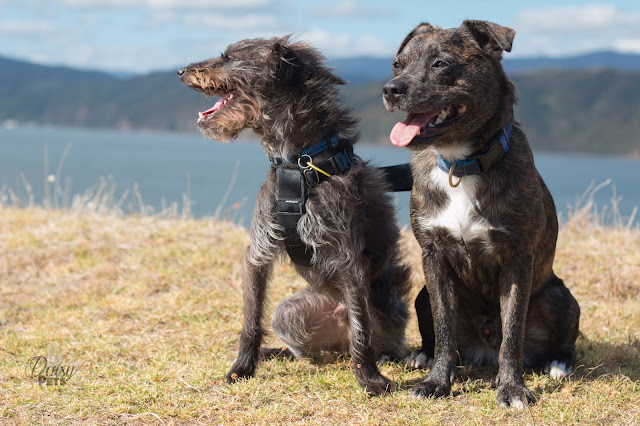 Finally, I secured a house that allowed Diego, the pigs and I. Plus it was completely our own, we didn't have to flat with anyone else! This was an amazing opportunity and I still live in this fantastic space to this day. I am once again forever grateful to my friend, Amelia for hooking me up with this house. I finally got to have Diego back with me full time. This was in December of 2016. He came back with some separation anxiety which is to be expected after I came and went every weekend for five months. We managed to work through those issues, which I will have a whole separate blog post about, and now he doesn't mind me leaving the house at all.

This is when issues started to appear more prominent. During my weekends in Whanganui I had noticed him becoming more snappy with dogs, but mum said he wasn't like that during the week, it was only when I was walking him. It also was not with every dog, he just picked and chose which dogs he would snap at. Once he got home to Upper Hutt, it became more and more frequent. At this stage instead of finding help, I retreated. I was scared that people would judge my ownership or my dog. I was scared that people would not like my content anymore when they realised I wasn't a great dog owner. And mostly I was embarrassed that once again I had raised a dog who couldn't be around other dogs. 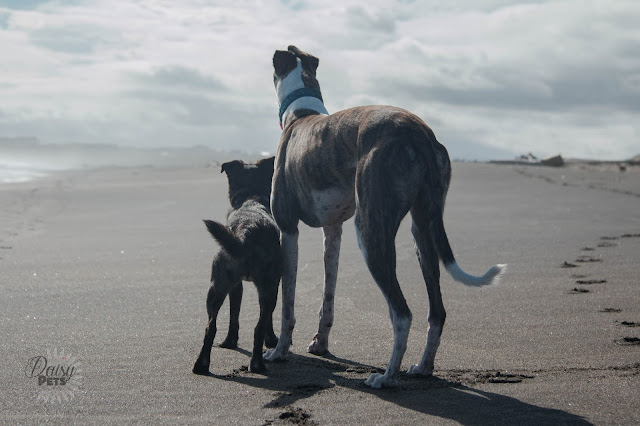 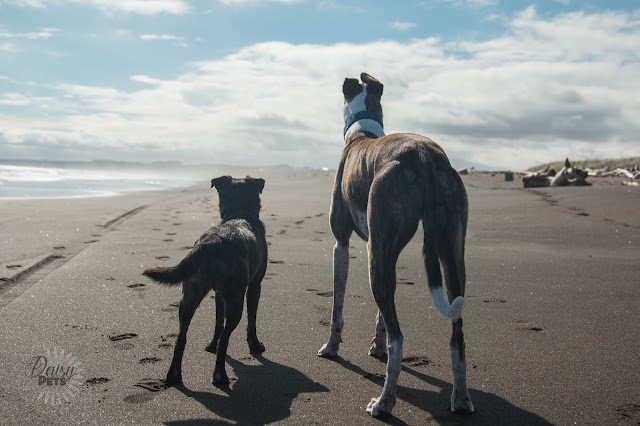 Inevitably, this made Diego worse. I stopped walking him where I knew other dogs would be, and for a while there just stopped walking him. I didn't allow him to greet other dogs, ever, in case he would snap at them. Slowly this made Diego even more crazy. He started barking on the lead when he saw other dogs in the distance, and I couldn't trust him around any dogs he hadn't previously met. He wasn't full on aggressive, he has never caused harm to another dog. I believe he is just scared. He cries after he snaps, and tries to get away. The minute the dog has left his vicinity, it's like it never happened, he goes back to normal.

I have to admit, this is a hard post for me to write. I am still quite embarrassed about Diego's reactivity, and 100% believe it is my fault that it has got to this point. I hate watching old videos or seeing old photos of Diego as a puppy being able to hang around other dogs. It makes me upset as I know now that he may never be able to fully immerse himself into the dog scene of New Zealand, and I do take the blame for that. No matter what anyone tells me, I will always believe in my heart that it's my fault.

I did get help, and in my next blog post I will explain the process behind that. This is going to be a series where we can follow Diego and I's journey through reactivity. I want to be inspired to work harder towards making Diego a better dog, and instead of hiding Diego away, being able to take him around dogs and not fear that he will attack them. I find that after a situation occurs, I want to stop walking him near dogs, and that is the wrong mindset to be in. I want to be able to take Diego to agility classes, and do more with him. So let's hope with the power of writing and sharing we can get there in the end.