This was originally posted on June 5th 2019.

Hey! When going down South, I didn't really have any true idea of what exactly I would need, and I definitely overpacked. When packing for Diego, I made sure to bring at least one of every type of product he owns including toys, collars, leashes, bandanas, light up collars, clothing and treats. I think for Diego, I did utilise pretty much everything, but there was one thing I had in the car that I didn't think I would use as much as I did. It became a staple in our travels, and I am not sure how Diego or I would have coped without it. 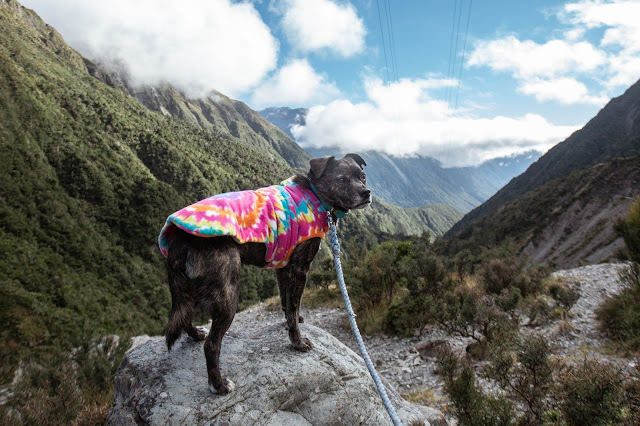 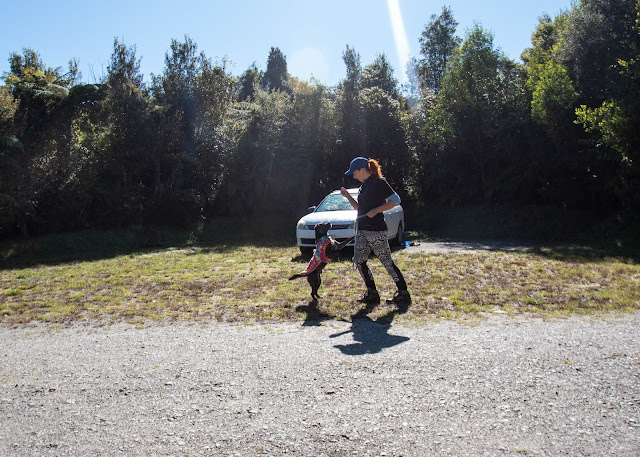 Before I tell you what the product is (although I bet you can tell from photos) let me explain the first night down South. We had been up since 4am, and travelling for most of the day including the drive to the ferry, the ferry trip, and then driving from Picton to just passed Havelock. We had explored heaps of little walks, and adventures along the way, already taken a bunch of photos and pretty much just wanted to sleep. Oh, and most importantly, right before I got into Havelock, I got my car stuck on a barrier and had to be saved by a local garage owner. Finally, at about 4.30pm we made it to our first freedom camping spot and started the process of trying to make dinner for the first time on my portable cooktop. It was freezing, I could feel my fingers breaking off and to add to my woes I had been trying to boil water on the cooktop for about half an hour. After finally admitting defeat to the water boiling, I added the rice and waited another hour for this to cook. In the end, it didn't really, but I was frozen, hungry and tired so I ate half cooked rice for dinner. After that, I crawled into my car, had a quick cry about why the heck I was doing this and went to sleep.

During this experience at the campsite, within moments, Diego was shivering and curled in the tightest ball of his life. I placed him into the warmth of the car but he was still shivering. I realised all too late, that during my prep for this road trip, I never factored in how Diego would cope with the cold. Diego has quite a sheltered life, never been forced to spend extended times outdoors and slept under the covers of my bed at night. He wasn't used to sitting outside as the sun went down with only a skinny little bed to relax on. Thankfully, during my excessive packing I made sure to pack Diego's JeddyBears Tugs & Toys Dog Coat.

I have already made a full review of the coats, which you can see by clicking the link above, but I needed to make another post dedicated to Diego's coat. I originally purchased the coat for during the Winter last year when I was working away from home, and needed him to be as warm as possible.

I wanted a coat that could keep him warm, but if he got caught on anything would easily come off. Another big thing was the ease of toileting, since I have seen other dog jumpers get gross when dogs go out for a wee. Thankfully, all these points of the coat actually made it the most amazing travelling coat for Diego. 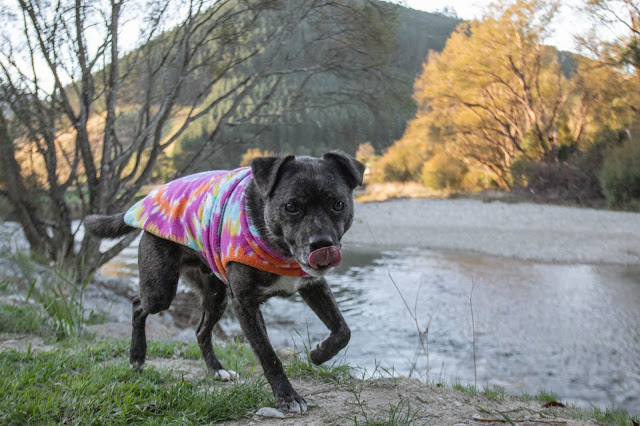 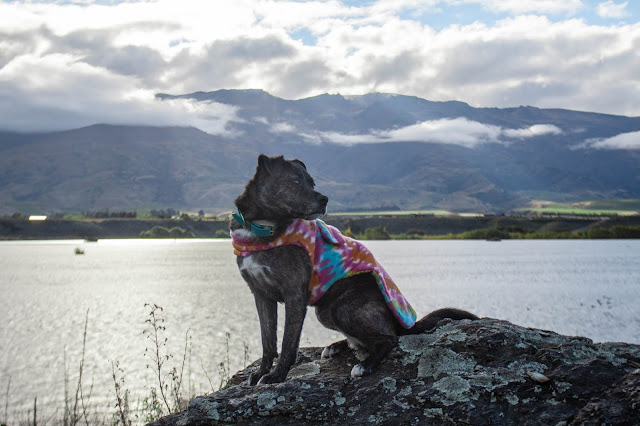 On that first night, I put the coat on and Diego stopped shivering nearly instantly. He was still in a tight ball, but I was a lot happier knowing he wasn't so cold that he was shivering. From then on, this coat was put on pretty much every evening and morning so that Diego could hang out with me while I tried cooking food. It meant that he was happy to be outside, and was not always forced to stay in the car to keep warm. It also bought a lot of amusement to the other campers! It was a big talking point for my trip, and was how I made a few friends along my road trip journey. I also caught a lot of campers just smiling at him when walking passed because he looked so fabulous in his coat.

The coat only has a strap along the underside of Diego, but is quite thick so that it covers most of his chest. I love this cut of coat as it doesn't get too grubby when Diego is running around. During our trip, Diego lay on the ground a lot which should have made the coat quite gross. However, that wasn't the case. I don't know if it was the material or not, but the worst part was that under strap, which once mud was dry, it could easily be patted off. He also liked to roll around in the dirt of a campground while wearing it and that also was easy to remove by shaking the coat out. 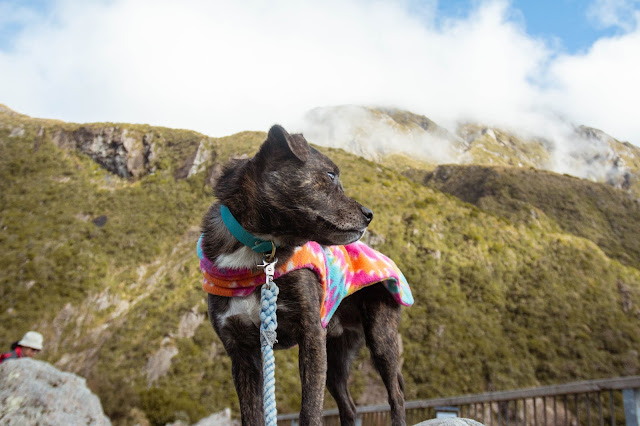 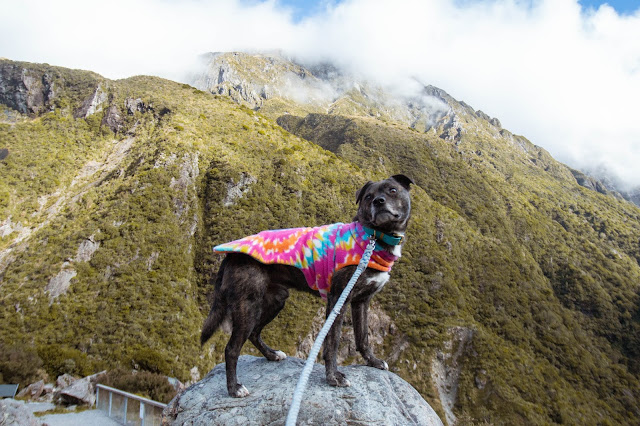 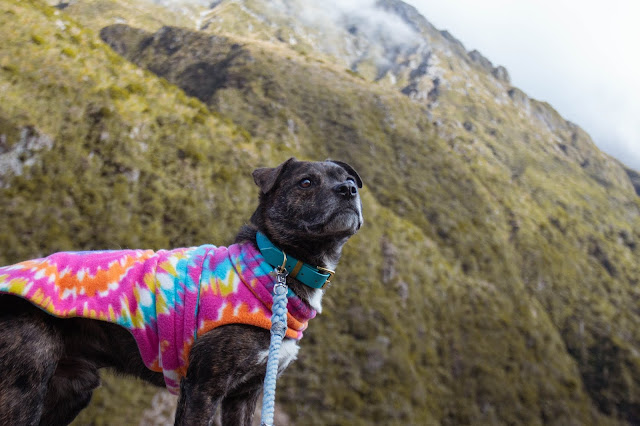 I definitely think this was one of the top used products of our trip which you can tell by the amount of photos I have of Diego wearing it. I even had to make sure to take the coat off for multiple photoshoots because I realised how much he had worn it. I can't say how well it would do in the rain though, as the few times the weather was foul, both Diego and I retreated to my car to hide.

I loved this coat so much that during my trip, I ordered another one to be made. This time in a super plush material with a fox print. I have now moved the original coat to my camping supplies box, so that I can always have it with us when we go away. It is the perfect material for adventures, and I can see it getting a lot more use over the next Winter as I start to camp and hike more on cooler days. The new coat is for at home this Winter as I don't want it even getting remotely grubby. It is too plush and nice for that! Recently, he has been wearing that coat on early morning power strolls around the neighbourhood, and at night.

I would highly recommend if you are on the lookout for a new coat that you have a look at JeddyBear Tugs & Toys. They are able to customise the coat to your dogs measurements, the type of cut you would like and you can chose the print. I love the team behind JeddyBear and think they are both such lovely ladies! If you would like to contact them you can do so on their Facebook Page, or go through TheDustyDingos on Instagram.